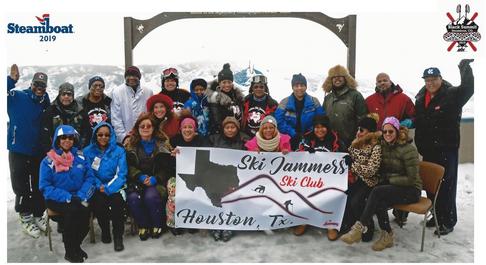 The National Ski Council Federation was formally established in 1999. It consists of the largest 29 ski councils in the United States and boasts a total membership of approximately 300,000 snowsports enthusiasts.

“Our mission is to strengthen councils, with industry participation, so they may better serve member clubs through communication, education and benefits, and to influence issues relevant to snowsports.”

The NBS, chartered in 1974 is a non-profit organization comprised of over eighty predominantly African American ski clubs. NBS clubs throughout the United States include over 12,000 adults and children as members. The major objective of the NBS is to identify, develop, and finance the training of young African American athletes who will someday qualify for the U.S. National and Olympic Ski and Snowboard teams. Find out more about the NBS on the web at http://www.nbs.org

Ski Jammers, the first predominately black ski club in Texas, was officially organized September 12, 1982 and chartered in January 1983 at which time we became accepted into the National Brotherhood of Skiers (NBS).  In May 1985 we joined the Texas Ski Council (TSC).   Our major objective is to promote snow skiing in the Black community with special emphasis on youth development.  We believe that people with similar ideas about skiing and snowboarding should join together to experience the fellowship in skiing and other social and athletic activities. We sponsor several ski trips each season, which can accommodate expert to beginner skiers. The club schedules several ski trips each year to resorts in the U.S., Canada, and Europe. You can participate no matter what your level of experience or ability at skiing or snowboarding.

Sun and Ski Sports is a valuable partner supporting the Ski Jammers in many ways.

The TSC is a non-profit organization of snow sports clubs in the state of Texas. The objectives of the TSC are to promote and encourage individual and group interest in snow sports and to secure economical and preferential services for Texas skiers and snowboarders. Find out more about the TSC on the web at http://www.texas-ski.org/